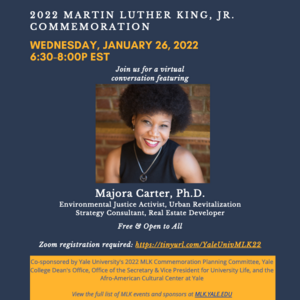 The University and Greater New Haven communities are invited to attend this year’s two-part MLK Commemoration that honors the life and legacy of Rev. Dr. Martin Luther King, Jr. We are pleased to announce that Majora Carter will serve as this year’s keynote speaker.

Notably, Carter founded the nonprofit environmental justice solutions corporation Sustainable South Bronx in 2001. Under her leadership, the organization secured the passage of New York City’s Green Roof Tax Abatement, launched one of the nation’s first and most successful green-collar job training and placement systems, and changed the national discourse on the relationship between environmental equality and economic development. Along the way, Carter produced and hosted the Peabody Award-winning public radio series, “The Promised Land,” which highlighted leaders of color in environmental and economic projects across the US.

She is a MacArthur Fellow and recipient of seven honorary doctorates, and she has received accolades from organizations as varied as the Center for American Progress, Goldman Sachs, News Corp, NRDC, The Eleanor Roosevelt Society, and many others. Carter’s 2006 TEDtalk, “Greening the Ghetto,” was one of six to launch TED.com to the world. She is quoted on the walls of the Smithsonian Museum of African American History and Culture: “Nobody should have to move out of their neighborhood to live in a better one,” which is also the subtitle of her book, Reclaiming Your Community, available in February 2022.

Carter lives in the South Bronx community where she was born and raised, and she is also the proud owner of The Boogie Down Grind, a curated cafe experience that celebrates Hip Hop culture and community roots. Launched in 2017, the cafe is the first commercial third space in the Hunts Point section of the South Bronx since the mid-1980s.

This virtual event is free and open to the public, but registration is required. Please visit this site to register: https://tinyurl.com/YaleUnivMLK22

Admission:
Free but register in advance
Contact:
Zoom Registration
Open To:
All Ages