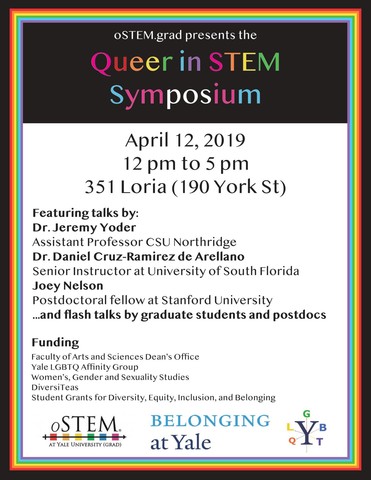 In 2013, a team of researchers conducted the Queer in STEM survey, the first study of queer individuals in science, technology, engineering, and mathematics. Allison Mattheis and Jeremy Yoder, two scientists interested in improving the climate for LGBTQ+ scientists, surveyed participants about their identities, experiences, and careers as LGBTQ+ individuals in STEM. The second iteration of the study, Queer in STEM 2.0, was conducted in 2016 and the results are currently being analyzed and readied for publication.

Inspired by their efforts, we set out to expand the conversation around changing the climate for LGBTQ+ individuals in STEM, and organized the first Queer in STEM Symposium here at Yale. The symposium will feature talks from queer researchers here at Yale, networking and community building events, and keynote talks from the Queer in STEM survey researchers themselves: